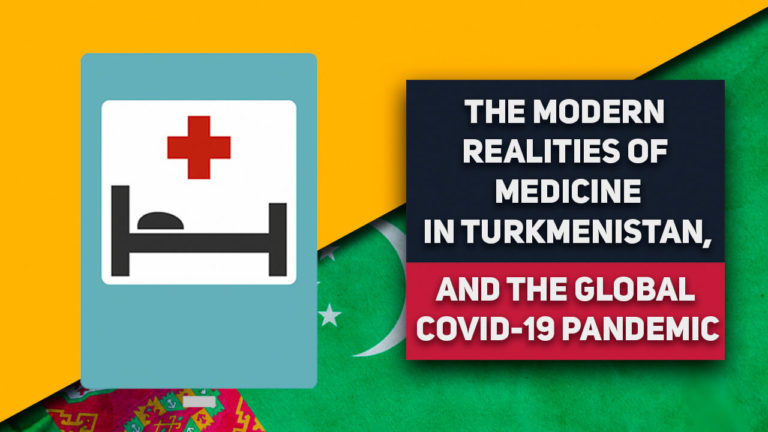 The conditions created to control the COVID-19 virus covertly, cannot be considered adequate to combat the pandemic.

Turkmenistan’s leaders’ answer to COVID-19: Concealment of the virus and quarantines in terrible conditions

Because of the similarity of coronavirus symptoms to those of the common cold, and the inability to determine specifically what a patient is sick with, the leaders of the country are sending people into quarantine.

To avoid panic within the population, people were initially chosen at random to be quarantined. Sources from Ashgabat reported that no one knew the basis of these selections. Citizens were simply placed in ambulances and driven to an infectious diseases hospital in the village of Cholgany. According to the report of one citizen residing in quarantine, she heard someone shouting in the hallway: “I can’t take care of 70 people all by myself!” It is worth noting that the hospital was not prepared for a quarantine; nothing at all was done for the citizens there. People were placed in a ward and were not allowed to open the windows or doors. The showers were broken. They were eventually repaired after a number of the patients raised a fuss. Patients complained about the poor food provided. They were forbidden from receiving clothes from their homes, and so they were forced to wear old, tattered smocks. A patient in quarantine also reported that: “The medical staff did not conduct any kind of analysis throughout the 14 days, they just took our temperature.” After 14 days, the citizens were allowed to return home.

Bakhar, a 35-year-old patient (whose name has been changed to protect her identity) reported the following: “We flew in from abroad. Just as we got off the plane, several passengers including myself and a man who I’d flown in with, were loaded into an ambulance. They just had one answer to all my questions: ‘This is how it’s supposed to be.’ We were driven to the hospital in Cholgany. After placing us all in one ward and taking away our belongings, they gave us some old, tattered hospital gowns [smocks]. At my outrage and my pleas to allow us to be sent belongings from our homes, they told me: ‘That’s not allowed.’ They forbid us from opening the windows, and we also weren’t allowed to open the doors to the ward. The conditions were dreadful. We were given pots for analysis of urine and feces. The showers were broken. After two days, I raised such a fuss that they finally ended up fixing them. There simply wasn’t any hot water, and moreover [access to it] was regulated. The food was just disgusting. After 14 days, we were sent home. The hospital stay was free, apart from the food, which we had to pay for in cash. It was simply a nightmare.”

Now sources are reporting that doctors’ and junior medical personnel’s phones are being confiscated, in order to conceal information about the coronavirus COVID-19 and any other viral infections. Medical personnel have reported this in Ashgabat, and the Ahal, Mary and Lebap regions. People believe this is done to prevent any photos or videos from being taken in the clinics. One of the employees at a clinic in the capital reported that doctors and nurses are signing nondisclosure agreements for the chief medical officer. He also reported that patients who have finished quarantine didn’t receive any kind of official document to indicate that they had been quarantined. The official party line is to prevent panic among the population. The people are fed the story that using herbal harmala will disinfect their environment and prevent the spread of diseases.

In spite of the cover-up of potential virus infections, these days the government has begun to treat public institutions and the entrances of residential buildings with chlorine solution. School vacation [spring break] has been extended until April 6, 2020.

In March, 2020 the Russian Federation established free testing systems to measure the presence of coronavirus without the need for laboratory research. This means that there was a chance the disease would be detected in the population of Turkmenistan, social distancing would be enforced, and perhaps at least symptomatic treatment would begin. However, there were not enough testing systems for this to happen.

Turkmenistan does not manufacture antiviral and immunomodulatory drugs. These products are shipped mainly from Russia and India. The drugs from Russia cost more than those manufactured in India. Even with medical insurance, pharmacies do not offer discounts on these drugs. Doctors prescribe medication, and the cost of all these treatments rests entirely on the sick patient and their family.

Turkmenistan’s healthcare system has been operating since 1991. Throughout this time, it has been deliberately undermined. All Russian speaking specialists were expelled from the country. Those who remained and continued to work in rural areas and in Ashgabat talked about the healthcare system’s complete unpreparedness for any kind of emergency on the scale of an epidemic or pandemic. In this article, the real names of citizens have been withheld for their own safety, given the fact that leadership in Turkmenistan does not tolerate any criticism of its actions.

Infrastructure of hospitals and clinics

In 2009 a so-called reconstruction of hospitals began throughout the country. This meant building repairs, and replacing windows, floors, toilets, and showers. However, problems with the supply of hot water were not properly resolved. Another 11 years went by, and during that time, yearly cosmetic repairs of hospitals were carried out practically at the personal expense of doctors and medical personnel, who together contributed a portion of their own wages. This was reported by a source who works in a clinic in the Ahal region.

In 2009 air conditioners were installed by the company Hayer, but they were never in working condition. According to reports from clinic workers, in 2016 a Ministry of Health commission ordered further equipment repairs, once again at the personal expense of hospital staff. The question of why the air conditioners had been delivered in unusable condition and had to be repaired in the first place was never answered.

Sources from five regions and Ashgabat reported that in hospitals and clinics, reorganization usually meant a reduction of hospital beds. Today, intensive care units in regional hospitals are provided up to five beds, and remote regional centers are given one. Remote hospitals in the Lebap, Dashoguz, Mary and Balkan regions are using old model RO-6 ventilators made in the Soviet Union. Some hospitals in these regions were allocated one or at most two ventilators, although considering these regions have no centralized supply of oxygen, either the equipment does not function, or doctors themselves must purchase oxygen cylinders and ensure their delivery to the clinic. This is a very dangerous process and a serious violation of official protocol, as any carelessness in transporting the oxygen could cause an explosion. There are no oxygen bags in the country.

Clinics in Ashgabat do have a centralized oxygen supply. However, intensive care units have just 5 to 10 beds, and only the Niazovsky hospital, which was built under the Soviet Union, has an ICU with 30 beds.

The government does not provide clinics – regardless of whether they are in the capital or rural regions – with essential single-use supplies such as medical gloves, masks, Blakemore tubes [an esophageal tube], urinary catheters, drainage pipes, etc. Doctors must acquire all these supplies at their own expense. Surgical suction tubes are used several times. The new electric pumps supplied do not work.

The more modern equipment delivered to hospitals cannot even be removed from its packaging. Although there are no specialists capable of operating the equipment, the Ministry of Health commission still needs to show that it’s available in clinics.

With the introduction of health insurance in the country, ordinary citizens cannot afford to receive treatment from these clinics; even if they have insurance, it covers only half the cost.

For example: Getting heart stents inserted at the International Cardiology Center – the only clinic in the country capable of performing such an operation – costs 17,000 manat (4,857 US dollars at the current exchange rate.) Most citizens simply cannot afford such a procedure.

It is also worth mentioning that Turkmenistan has no private clinics or hospitals. All medical institutions are government-operated.

In general, insurance covers 50% of the cost of a hospital stay, specifically the cost of the bed and the medical care. The expenses for medications administered, medical equipment used, and even the food consumed during the hospital stay, must all be covered by the individual themselves.

The deplorable healthcare situation consists not just of a lack of basic essential medical equipment. In the country, there is a real lack of doctors able to diagnose and treat illnesses. Catastrophically, laboratories lack competent specialists capable of conducting analyses and drawing conclusions from their results. Moreover, labs lack the chemical agents needed to conduct various studies. Turkmenistan’s entire healthcare system is built on fraud and fabrications designed to create the external impression of wellbeing, by demonstrating compliance with the public health standards designated by the country’s own Ministry of Health, which is then broadcast to international and intergovernmental organizations. An example of this deception can be seen in reports by the WHO and UN about the absence of AIDs, tuberculosis, and coronavirus in the country. There is a complete lack of data about regional pathologies – hepatitis A and B.

Currently sources from the Ministry of Health are reporting that epidemiology and virology are not considered prestigious professions, and that there is no desire in the country to work in these fields. At the Morphological Institute and the Center for the Prevention of Highly Infectious Infections of the State Sanitary and Epidemiological Service, staff are not provided the necessary number of competent specialists, and no research is conducted there. They are incapable of providing appropriate assistance in an emergency. Instead of assessing various commercial products’ compliance with sanitary and hygienic standards, health inspectors are in fact engaged in extortion; they simply take bribes. If a vendor refuses to offer a bribe, they are made to pay a legal fine; and so the actual products sold do not comply with the standards, and can endanger the health of the population. These are the primary duties of a health inspector in Turkmenistan. 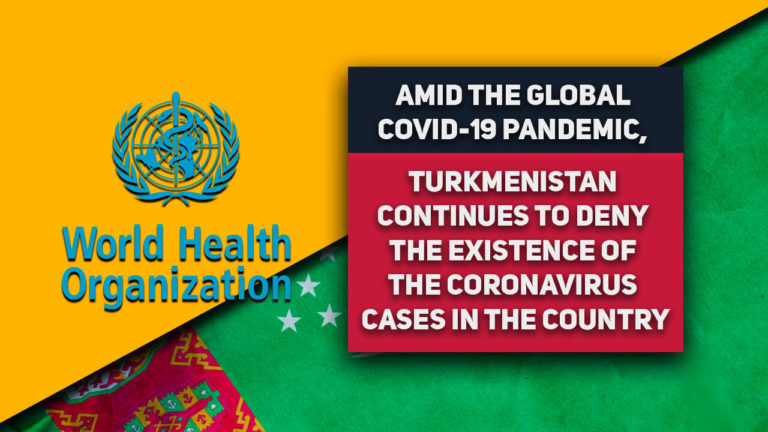 Amid the Global COVID-19 Pandemic, Turkmenistan Continues to Deny the Existence of the Coronavirus Cases in the Country

Against the backdrop of Turkmenistan’s denial of coronavirus in the country, the WHO decided to visit the country this week in order to assess the current situation.